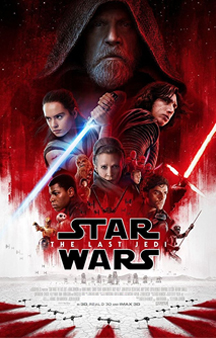 GENRE: Action / Adventure / Fantasy / War
RATING: PG-13
RUNNING TIME: 2:32
STARRING: Daisy Ridley , John Boyega , Oscar Isaac
DIRECTOR: Rian Johnson
PRODUCER(S): Ram Bergman
WRITER(S): Rian Johnson
MOVIE SYNOPSIS: A new adventure is about to begin, old and new characters besides old familiar faces, prepare for what is to come, because archaic secrets of the Force and shocking revelations of the past will be revealed. This eighth installment of the space saga begins immediately after the events that occurred at the end of Star Wars: The Awakening of Force(2015). In her many unknowns are raised for the protagonists. Will the young junkyard King (Daisy Ridley), from the planet Jakku, become Jedi after seeing that she is sensitive to the Force? Will it be the legendary Jedi Master Luke Skywalker (Mark Hamill), exiled to a distant part of the galaxy, who will teach King the designs of the Force? How will General of the Resistance Leia Organa (Carrie Fisher) face the death of Han Solo at the hands of his son Ben Solo, turned into Kylo Ren (Adam Driver), leader of the Knights of the First Order? What will the talented Resistance pilot Poe Dameron (Oscar Isaac) and Finn (John Boyega), the former stormtrooper who is free from the clutches of the First Order, do now?